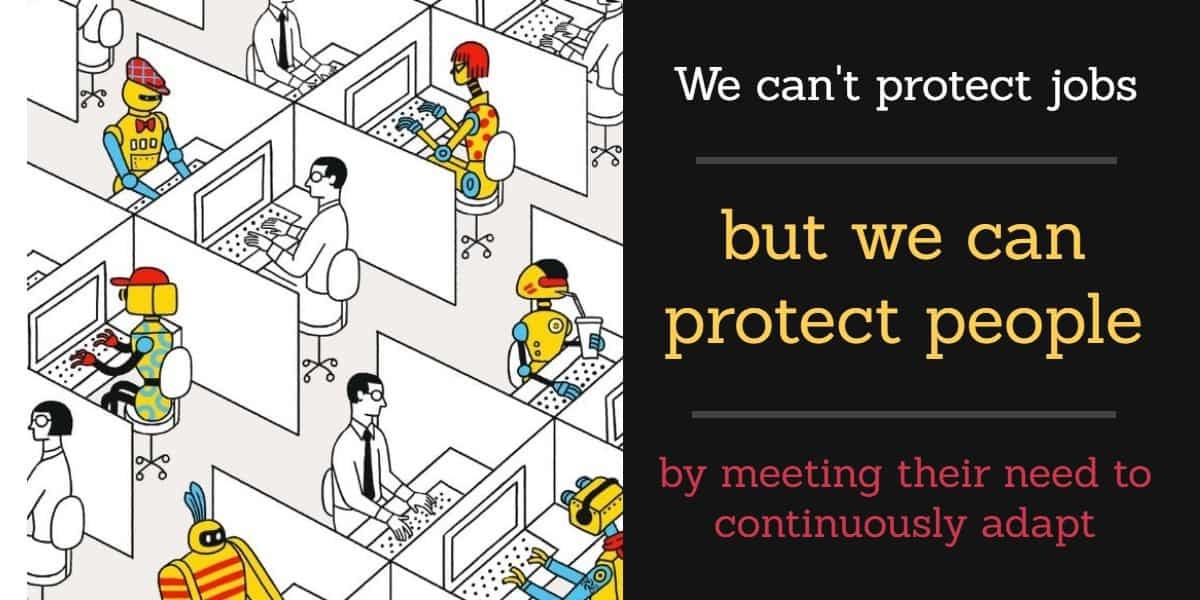 So – what did I learn about AI at The Future of Work conference on 13 March?

Work of the Future – Hype, Reality and Unknowns – Elizabeth Reynold

AI will have a similar impact to the Industrial Revolution, but on a much tighter timescale – 30 to 40 years rather than a century. But it may not be a threat. In fact, it’s possible that AI could augment or complement jobs rather than displacing them. Perhaps 75% of jobs could be augmented in this way, though further data and research is needed. But adult learning – especially for older workers more impacted by new technology – will be crucial.

The session began, appropriately, with Douglas Adams’s wise words about our reactions to new technology:

China and North America will see the biggest gains from AI by 2030. In the UK, by then, it should add about 10% to UK GDP – roughly the same amount as economists are predicting we may lose as a result of Brexit.

By the mid-2030s, AI will affect 30% of all UK jobs – about 10 million workers. So, it’s vital for employers to start now. We can’t protect jobs – but we can protect people, by meeting their need to continuously adapt. The UK government woke up to this fact about two years ago and has started to act on the implications of AI in the workplace.

On a lighter note Rob pointed out that AI appears to struggle with British sarcasm and irony. Which may, perhaps, be another instance of inadvertent bias…

A very simple message from this session. “If we don’t reinvent ourselves, somebody else will. You must start now.”

Q:           Will the development of AI require more computer scientists or more philosophers?

A:            (Elizabeth Reynolds) We need computer scientists who are also philosophers. People will need digital, technical and human literacy. (Amy Zulman’s article in The Guardian is helpful here.)

A:            (All panel members) Skills atrophy is a concern in a future that is dominated by AI. Continuous adult education is crucial. Immersive virtual reality could be a potential cure for skills atrophy.

What will motivation look like in the future? – Philip Stiles

A New York Times article revealed that 69% of employees want curated workplace learning to ensure they do not lose their jobs to AI. Traditional approaches to learning use scheduled events focused on delivery and centred on instructors. These now take a back seat to more informal approaches that are ongoing, learner-centred and decentralised, focusing on results. It means learners can explore whatever resources they choose.

Given that change, how can we take advantage of the opportunity it presents? How can we explore, curate and deliver the resources they need, when they need them?

It’s possible that only a relatively small group can win out. They would be serviced by a much larger group, whose income and employment would both be insecure. And the remainder of the population would have to survive on a basic universal income.

As lifespans increase beyond 100 – and advances in technology continue to accelerate – people will be looking at as many as four or five careers in a lifetime. It will be vital to keep ourselves relevant. Deloitte’s Artificial Intelligence Innovation Report concludes that:

AI augmentation will affect machines at every level, and in every occupation from lawyers to truck drivers. But what impact will this have on users?

In France every worker has a legal right to disconnect from their business email feed when they are not at work. But Monideepa’s research shows there is in fact a sweet spot between too much and too little email. If there is too little, people get anxious and feel they have been overlooked in the workplace. Her paper on Using AI to Enhance Business Operations will be published this summer – look out for it!

Her final question: “What are we teaching machines? and what are humans learning?”

The Stanford Institute for Human Centred AI website. ‘Artificial Intelligence has the potential to help us realize our shared dream of a better future for all of humanity, but it will bring with it challenges and opportunities we can’t yet foresee.’

The Moral Machine MIT’s platform for gathering a human perspective on decisions made by machine intelligence, such as self-driving cars